The whites in the audience at a recent Detroit city council meeting were told to “go home.”
They were not wanted. 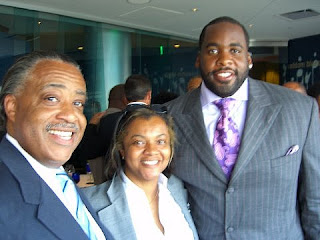 Here’s the latest from the cesspool once known as Detroit.
Keep it classy, racist Democrats.
Detroit News reported:

Nowhere is Michigan’s brain drain on greater display than in the Detroit City Council chambers.

My hopes for Detroit’s future faded as I watched the tape of last Tuesday’s council meeting, the one that considered the Cobo Center expansion deal.

It was a tragic circus, a festival of ignorance that confirmed the No. 1 obstacle to Detroit’s progress is the bargain basement leaders that city voters elect. The black nationalism that is now the dominant ideology of the council was on proud display, both at the table and in the audience.

Speakers advocating for the deal were taunted by the crowd and cut short by Council President Monica Conyers, who presided over the hearing like an angry bulldog; whites were advised by the citizens to, “Go home.”

Opponents were allowed to rant and ramble on uninterrupted about “those people” who want to steal Detroit’s assets and profit from the city’s labors.

A pitiful Teamster official who practically crawled to the table on his knees expressing profuse respect for this disrespectful body was battered by both the crowd and the council.

When he dared suggest that an improved Cobo Center would create more good-paying jobs for union workers, Conyers reminded him, “Those workers look like you; they don’t look like me.”

Juxtapose the place and the faces and imagine a white Livonia City Council treating a black union representative with such overt racial hostility. The Justice Department would swoop down like a hawk, and the Rev. Al Sharpton would clog Five Mile Road with protesters.