It’s Thursday. It must be time for that weekly Palin Bash…
Ben Smith at The Politico cites a ridiculous poll of 133 undergraduates to announce that Palin’s looks hurt John McCain during the election. 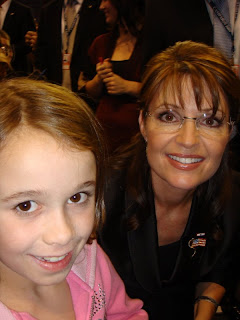 A new article in the Journal of Experimental psychology makes the case that Sarah Palin’s looks — and the focus on them — hurt her and John McCain in November’s election.

The study is behind a pay wall, but Tom Jacobs summarizes the findings:

The participants were then asked to rate their subject (Palin or Jolie) in terms of various attributes, including competence. Finally, they were asked who they intended to vote for in the upcoming election.

Those who wrote about Palin’s appearance were more positive in their assessments than those who assessed her qualities as a person. But they rated her far lower in terms of competence, intelligence and capability, and were far less likely to indicate they planned to vote for the McCain-Palin ticket.

“It wasn’t her appearance per se” that soured people on Palin, Heflick said in an interview. “It was the effect her appearance had on their perception of her competence and humanity. Those variables made people less likely to vote for her.”…

What BS.
First of all, 133 individuals is not much of a sampling base.
And, considering at least 66% of undergrads voted for Obama, this poll was going to be distorted from the start. That means maybe 40 of the kids were McCain supporters from the get-go.
Honestly, was it really necessary to report this poll?

All I need to do is look at donations to the McCain campaign in the the days that followed Governor Palin VP annoucement to see that this study is crap.