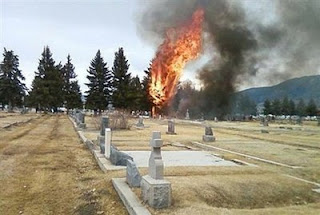 Picture provided by the Montana Standard shows a small, single-engine plane bursting into flames in Holy Cross Cemetery on the outskirts of Butte, Montana. US investigators are searching for clues after a small plane taking children to a ski trip crashed in a cemetery in the state of Montana, killing 14 people on board.
(AFP/The Montana Standard/Martha Guidoni)

Some of you may have seen the major news story of the private plane that crashed into a Montana cemetery, killing 7 children and 7 adults.

But what the news sources fail to mention is that the Catholic Holy Cross Cemetery owned by Resurrection Cemetery Association in Butte – contains a memorial for local residents to pray the rosary, at the ‘Tomb of the Unborn’. This memorial, located a short distance west of the church, was erected as a dedication to all babies who have died because of abortion.

What else is the mainstream news not telling you? The family who died in the crash near the location of the abortion victim’s memorial, is the family of Irving ‘Bud’ Feldkamp, owner of the largest for-profit abortion chain in the nation.

The plane went down on Sunday, killing two of Feldkamp’s daughters, two sons-in-law and five grandchildren along with the pilot and four family friends. The plane, a single-engine turboprop flown by Bud Summerfield of Highland, crashed into the Catholic cemetery and burst into flames, only 500 ft. from its landing destination. All aboard were killed.

What a tragedy.
May they rest in peace.