The economy continues to shrink with Barack Obama and the anti-business Democrats in charge.
…But Obama did save 25 jobs for one year today. 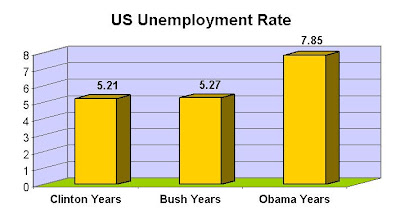 The unemployment rate is now the highest its been since 1983 when Ronald Reagan started to turn the economy around after the disaster of the Carter years.
The AP reported:

The nation’s unemployment rate bolted to 8.1 percent in February, the highest since late 1983, as cost-cutting employers slashed 651,000 jobs amid a deepening recession.

Both figures were worse than analysts expected and the Labor Department’s report shows America’s workers being clobbered by a relentless wave of layoffs unlikely to ease anytime soon.

The net loss of 651,000 jobs in February came after even deeper payroll reductions in the prior two months, according to revised figures released Friday. The economy lost 681,000 jobs in December and another 655,000 in January.

The American Small Business Association already announced that 14% of small businesses may close this year due to the hostile policies of the Obama Administration.
This will add significantly to the unemployment numbers.

It’s too bad the democrats wouldn’t listen to Goerge Bush or John McCain when they had the chance.