Several economists are starting to see that Obama inherited a bad situation and made it much, much worse. 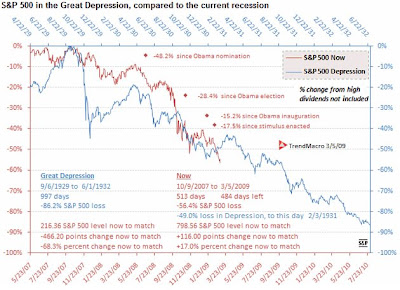 Click to Enlarge
This chart shows that the current economy is tracking right with the Great Depression.

Another disillusioned economist comes down hard on the Socialist in Chief.
Donald Luskin at Smart Money reported, via Free Republic:

In other words, to be no worse than the catastrophe that happened to stocks in the Great Depression, the S&P 500 today would have to rally 17%.

Looking forward, if stocks are going to continue along the same bleak path they followed during the Great Depression, then I have good news and bad news. The good news is that we’re halfway through it. In the Great Depression, the bear market lasted 997 days. We passed that halfway mark two weeks ago. Maybe that’s what Barack Obama meant when he said, as he signed the so-called “stimulus” bill, that this was “the beginning of the end.”

He signed that bill on Friday the 13th, by the way. Which brings me to the bad news. By the time the bear market was over in the Great Depression, on that 997th day, the S&P 500 had lost 86.2% from the top. To match that, we’d have to fall another 68.3% from here. Hmmm…maybe that’s what the president meant when he said this was “the beginning of the end.”

We can’t blame President Obama for the mess he inherited. But we can definitely blame him for making it worse. Stocks are off 28.4% since his election, 15.2% since his inauguration, and 17.2% since his so-called “stimulus” bill was enacted. To say the very least, whatever he’s doing, it ain’t working.

I have to say I’m a little surprised. I didn’t support Obama in the campaign, but I had expected that the wave of good feelings from the election of such a charismatic man would help lift the economy and the markets out of their doldrums. And while I don’t agree at all with his liberal orientation in economic policy, at least I thought he was generally a centrist who wouldn’t muck things up too much or too quickly.

Not all of us are so surprised, Donald.
The fact that so many intelligent people believed the most liberal senator would lead as a centrist is what is really shocking.

Related… Doug Ross looks at the causes behind the Meltdown.