It’s been at least 8 years since America has had such a self-absorbed and selfish First Lady.
In a recent interview the Far Left wife of the antiwar president was just too impressed with herself for noticing that the military families actually sacrifice for their country here in America.

This is something Michelle Obama picked up on last year during the campaign– seven years into the War on Terror.

Team Obama even went as far as to suggest that military families “had probably have never been invited to the White House.” 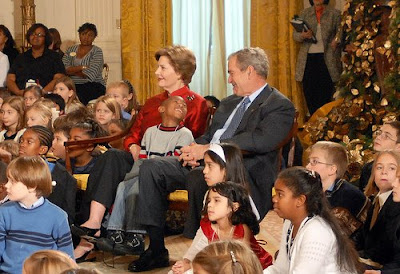 CHILDREN OF MILITARY families – – many with a parent deployed – – gather for White House reception. (Flickr)

What a slap in the face to the Bushes.
It truly takes a liberal to be that self-absorbed.
And, it takes a liberal media to be oblivious to the fact that the Bush family spent hundreds of hours comforting military families.
The Wall Street Journal reported:

By choosing Fort Bragg for her first official trip outside the capital last Thursday, Michelle Obama signaled that she will use her position as First Lady to promote one of America’s most deserving causes: our military families. Plainly the families loved it. Just look at the smiles on those children as she read them “The Cat in the Hat.”

So it was just a little disconcerting the next morning to hear the First Lady explain how she came to this issue during last year’s campaign. “I think I was like most Americans,” she told ABC News. “Pretty oblivious to the life of military families. Sort of taking it for granted.”

Perhaps Mrs. Obama did take these families for granted. Surely, however, it’s extraordinary to suggest that “most Americans” did the same. Certainly not the McCains, the Bidens and the Palins, each of whom had at least one son in uniform. More to the point, the presidential campaign in which she says the issue started “taking shape” for her came nearly seven years into a war that has inspired millions across America to step forward to help our troops.

If the ABC interview was a one-off thing, it would be easy to overlook. But these days the reporting seems to reflect an assumption that if the Obamas haven’t done something, nobody else has, either. Certainly the Washington Post did not challenge the First Lady’s social secretary when she said, “one idea Michelle had was to have an event for military families — here they are sacrificing so much for the country and many of them probably have never been invited to the White House.”

This uncritical reportage does Laura Bush an injustice. In hundreds of ways — picnics on the South Lawn, fund-raising for scholarships for the children of sailors on the USS Texas, unheralded visits with the wounded and families of the fallen, the work she did for military kids under her Helping America’s Youth initiative — Mrs. Bush showed our troops and their loved ones how close they were to her heart.