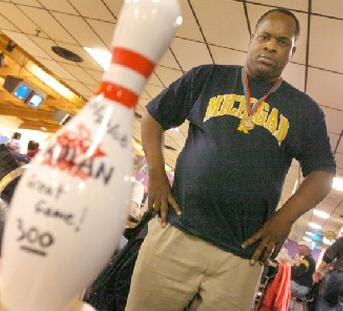 With a couple of 300 games to his credit, Kolan McConiughey does not appreciate the president’s bowling jokes at the expense of Special Olympians.

The first appearance by a sitting president on “The Tonight Show” may well end up being the last.

President Obama, in his taping with Jay Leno Thursday afternoon, attempted to yuk it up with the funnyman, and ended up insulting the disabled.

Towards the end of his approximately 40-minute appearance, the president talked about how he’s gotten better at bowling and has been practicing in the White House bowling alley.

It’s “like the Special Olympics or something,” the president said.

In response Special Olympian Kolan McConiughey said that he can beat the president easily.
The AP reported:

So President Barack Obama thinks he bowls like a competitor in the Special Olympics?

He’s obviously never met Kolan McConiughey, a mentally disabled man considered one of the nation’s top Special Olympics bowlers, with five perfect games to his credit. He’d like to go to the White House and show the president a thing or two about how to roll strikes.

Look for White House Press Secretary Robert Gibbs to bash Kolan at the next press conferece.