It figures. Obama’s first judicial nominee is a raving lunatic. 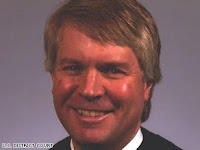 Judge David Hamilton ruled that prayers in Jesus Name at the Indiana House of Representatives was unconstitutional, but prayers to Allah were not.
Traditional Values Organization reported, via LGF:

True to his campaign promises, President Barack Hussein Obama has picked a rabid judicial activist as his first federal court pick. Judge David Hamilton has been chosen by Obama to serve on the U.S. Court of Appeals for the 7th Circuit.

Hamilton is precisely what Obama wants in a judge: Someone who ignores the Constitution and imposes his own liberal ideas on each case. Hamilton will have what Obama calls “empathy” for the poor, child molesters, abortionists, murderers, etc.

Hamilton has ideal liberal credentials. He is a former ACLU lawyer and was a fundraiser for the corrupt group known as ACORN. This organization engages in fraudulent voter registration campaigns and is deeply involved in housing and poverty issues. Obama was an attorney for ACORN when he worked as a “community organizer” in Chicago. ACORN will be gathering data for the 2010 Census.

…Hamilton is also an enemy of the First Amendment and religious freedom. Interestingly enough, Hamilton has ruled that prayers in Jesus Name at the Indiana House of Representatives was unconstitutional, but prayers to Allah were not.