Hooray! Those days of maxing out your credit cards are over! 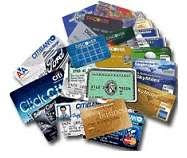 Obama says that your days of maxing out your credit cards are over(?)
The AP reported:

Turning more upbeat, President Barack Obama said Friday his administration is working to create a “post-bubble” model for solid economic growth once the recession ends. He said that means the days of overheated housing markets and “people maxing out on their credit cards” are over. But first, Obama said, “We’ve got to get through this difficult period.”

There are “modestly encouraging signs” on that score, said Lawrence Summers, Obama’s top economic adviser, citing indications that consumer spending had stabilized after taking a dive over the holiday season…

Administration officials were criticized earlier this year for painting too dark a picture of the economy in an effort to win congressional passage of the president’s $787 billion stimulus package. But more recently, the president and others on his team have tempered their comments in hopes of building confidence, including the president’s suggestion last week that it was a good time for those with a long-term perspective to buy stocks.

This is a trainwreck.
What’s going to be the gimmick next week?
No one knows.