Muslims and Anti-Jew Protesters Riot at Israel’s Davis Cup Match in Sweden:
This is incredible video from Malmo, Sweden:

Sweden forced the Israeli Davis Cup tennis team to play in an empty stadium due to threats of violence by local radicals.
But that didn’t stop them from attacking the stadium.
Thousands of protesters attacked police at the Davis Cup Match today between Israel and Sweden.
The UPI reported on today’s violence:

Thousands of people demonstrated Saturday during Israel-Sweden Davis Cup play in Malmo, Sweden, to protest the invasion of Gaza.

Police estimated the crowd of protesters at 6,000, The Local reported. About 1,000 officers were on duty on the ground and in helicopters.

Most of those at the Stop the Match march were peaceful but police said some young people rushed the barricades and threw rocks with about five arrested, the BBC reported. 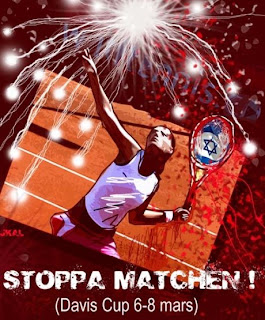 The radicals even set up a website to protest the Israeli team. 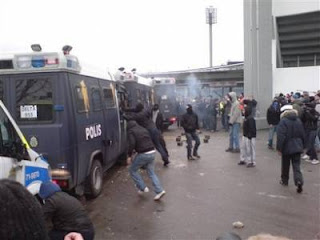 Masked protestors clash with police outside the Baltic Arena in Malmo, Sweden, Saturday March 7, 2009. Dozens of anti-Israel activists clashed with police Saturday as they tried to storm a closed arena where Sweden and Israel were played a Davis Cup tennis match. (AP Photo/Drago Prvulovic)