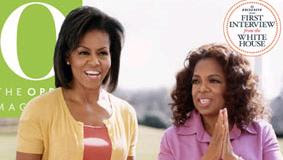 Perky Michelle Obama tells Oprah that she was surprised that all Americans shared values, wanted their children to be safe and were nice in her latest interview.
CNN reported:

Oprah Winfrey: How are you a different woman today than you were when Barack Obama announced his candidacy in 2007?

Michelle Obama: I’m more optimistic. More hopeful. It comes from traveling all over America and connecting with so many different people. And this was long before anyone thought Barack had a chance. This was the kindness of strangers. I think we should all have to get to know one another around kitchen tables. It changed me. It’s helped me to give other people the benefit of the doubt.

Winfrey: What did you see that changed you?

Obama: I saw our shared values. We fundamentally want the same things for ourselves and for each other. We want our kids to be safe and to grow up with some resources and aspire to a slightly better life than ours. No one’s looking for a handout. People just want fairness and opportunity.

Winfrey: That’s so good to hear. Because you know what? We live in an “American Idol” culture where it seems like everyone just wants to be in the spotlight.

Obama: That’s not the America I saw. People value their communities. They’re rooting for one another. Even in places where I thought people wouldn’t accept or relate to me, I always walked out feeling like, “Wow — that was fun.”

Tell me– Why are liberals always so shocked to find out that Americans are good people?