Who knows… Maybe this will make her proud of her country? 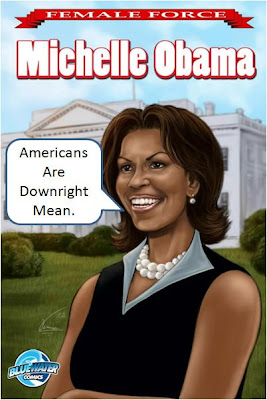 She’s not faster than a speeding bullet or more powerful than a locomotive.

Able to leap tall buildings in a single bound? Hardly.

But First Lady Michelle Obama is poised to become a superhero next month when a biographical comic book hits the stands.

While the Clinton and Palin comics are already on their second printings, their publisher believes Obama will be an even bigger seller. Distributors have stopped taking orders temporarily while Washington-based Bluewater Productions catches up with the demand.

“I feel like the guy who invented the Furby,” Bluewater President Darren Davis said. “The reaction has been insane.”