Ya think?
Atlanta City Hall’s choice of artwork is creating an uproar.
Especially the piece with the secret message that says, “Politically it’s OK to hate the white man.” 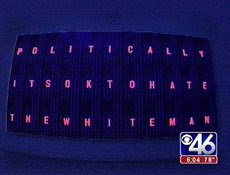 Except it’s not so secret.

A pair of Atlanta police officers have filed complaints against a piece of artwork that is being displayed at City Hall East.

They are the latest complaints about the controversial display that some say promotes racism. Many of those complaining insist that the art be taken down.

The exhibit is designed to showcase both well-known artists as well as those just starting out. The piece that is garnering all of the attention is called “Formula For Hatred.”

“If I had thought it was offensive, I would not have agreed to show it,” said curator Freddie Styles.

Of all the pieces in the City Hall East art display, Styles said he expected complaints about the sketches of nudity — but not the one that is getting all the attention.

“I thought it was an attractive piece visually,” Styles said.

The piece has 32 flags, with a hidden message that reads, “Politically It’s Okay To Hate The White Man.”

City officials have refused to remove the anti-White propaganda from the government building. The matter may go as far as the EEOC, as it violates federal law regarding discrimination in the workplace.

Could you even imagine if this artwork would have been against black Americans?
What a disgusting double standard.

UPDATE: Thanks Paula for sending this article by the artist at Big Hollywood.
It appears that the artist is not the typical lib who is usually behind such racist hate pieces.