When it comes to Iran, you know, we did a video sending a message to the Iranian people and the leadership of the Islamic Republic of Iran. And some people said, ”Well, they did not immediately say they were eliminating nuclear weapons and stop funding terrorism.” Well, we didn’t expect that. We expect that we’re going to make steady progress on this front.

Well, so much for steady progress.
After Obama’s greeting to the regime in Iran, Supreme leader Ali Khamenei responded that, “Change in words was not enough.” 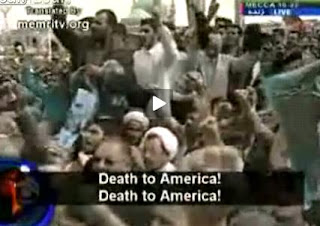 So much for steady progress.

Reading it, I recalled how we, the democratic dissidents of the Soviet Union, looked in desperation and anger (and sometimes with deep disdain) at the messengers of the “free world“, who were willing to accept the Soviet Union as it was, who denied the policy of linkage between human rights and international pressure, and who did everything to downplay the military threat of the Soviet dictatorship. Immediately I thought what Iran’s democratic dissidents must be thinking while reading such an article?

Roger Cohen writes that recently he traveled to Iran twice, and that in his opinion, the best way of helping the Iranian people is through engagement. Does he mean engagement with young Iranian bloggers (one of whom died in a prison cell two days before Cohen’s article was written)? Does he mean engaging in a dialogue between trade union leaders, or student organization leaders, or the leaders of women’s organizations, who are not afraid to challenge the regime, and to risk their life and freedom? No, he recommends engaging with the fanatical leaders who are filling the minds of their citizens with hatred and whose “provocative rhetoric masks essential pragmatism”. (Direct quote from R. Cohen’s article, NYT)

The last quote could easily have come from Western intellectuals who spoke of Stalin’s pragmatism in the bloodiest years of the purges. Cohen insists that an analogy between the Iranian regime and the Nazis “dishonor[s] six million victims of the Holocaust.” Perhaps he would be right, if we were to compare Iran to Hitler’s Germany in 1944-45. However, if we compare it to Hitler’s nascent regime in 1933-35, when he actively prepared the German people for the reality of a better world without Jews in it, then the comparison to Ahmadinejad, who organizes international conferences where he prepares the world to live without Zionism, is eerie in its similarity.