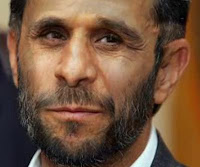 A children’s program in Iran was cancelled this week after a child called his toy monkey “Ahmadinejad” live on the air.
The Telegraph reported:

When the presenter of Amoo Pourang (Uncle Pourang), a programme watched by millions of Iranian children three times a week on state TV, asked the name of the toy the boy had been given as a reward for behaving himself, the child replied: “Well, my father calls him Ahmadinejad.”

The father’s likely unease at his son’s honesty was matched by the programme makers after the state broadcaster, IRIB, immediately responded by removing the show from viewing schedules, The Guardian reported.

The popular show has been running for a very successful seven years but is now due to screened for the final time next week, the paper added.

Jahan News, a conservative website, said the decision was sparked by “the high financial and spiritual damage” caused by live broadcasts.

Eluding to the naming of the monkey, the statement highlighted an incident in which “a child in a live telephone line compared its doll to one of the well-known authorities and managers”.