Obviously, Hugo did not have to ask twice.
Obama and the democrats are already 3 steps ahead of him. 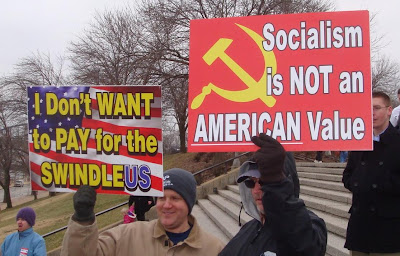 In fact, Many Americans including the tea party protesters think it might be too late.
Obama embraced socialism a long time ago.

Venezuelan President Hugo Chavez on Friday called upon US President Barack Obama to follow the path to socialism, which he termed as the “only” way out of the global recession. “Come with us, align yourself, come with us on the road to socialism. This is the only path. Imagine a socialist revolution in the United States,” Chavez told a group of workers in the southern Venezuelan state of Bolivar.

The controversial Venezuelan leader, who taunted the United States as a source of capitalistic evil under former president George W Bush, added that the United States needs a leader who can take it to a “higher” destiny and bring it out of “the sad role that it has been given, as a murderous, attacking power that is hated all around the world.”

Chavez said that people are calling Obama a “socialist” for the measures of state intervention he is taking to counter the crisis, so it would not be too far-fetched to suggest that he might join the project of “21st century socialism” that the Venezuelan leader is heading.

“Nothing is impossible. Who would have thought in the 1980s that the Soviet Union would disappear? No one,” he said.

“That murderous, genocidal empire has to end, and some day there has to come a leader … who interprets the best of a people who also include human beings who suffer, endure, weep and laugh,” the outspoken Chavez said.

Who knows?
Chavez may have found himself another brother.