Hollywood nitwits are hoping their presence in Iran can help to kick-start talks between arch-foes Washington and Tehran. 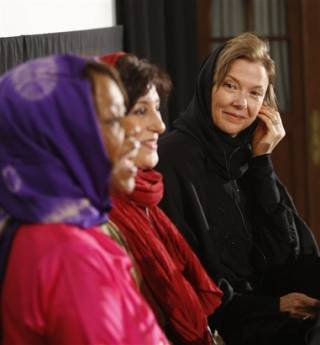 US actress Annette Bening, right, listens to fellow US actress Alfre Woodard, left, as Iranian actress Fatemeh Motamed Arya, looks on at center, during a seminar ‘Acting for Film’ given by Bening and Woodard, in Tehran, Iran, Sunday, March 1, 2009.
(AP/Vahid Salemi)

The regime on Sunday demanded an apology from the team of visiting Hollywood actors and movie industry officials, including Annette Bening, over films such as “300” and “The Wrestler” that were “insulting” to Iranians.

There was no word on what the regime thought of Bening’s work.