SHSW- (Single Hamas Shahid Widow)– She’s young, has only 4 children (and one on the way!), is good with explosives, and likes to have fun. 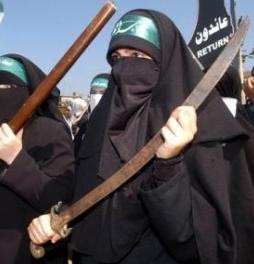 Oh… And, she wants a man who won’t explode over the little things.

Hamas is offering a $3000 reward for any man willing to marry the widow of a “shahid” (a martyr), several Arab websites reported this week.

Hamas initiated the move in an attempt to lower the number of widowed women in the Gaza Strip who lost the spouses who provided for them and their children, and in order to ease their emotional grief and financial difficulties.

The number of widows in Gaza has grown dramatically after Operation Cast Lead. The Palestinian society regards divorcées and widows in a negative way, and young men usually refrain from marrying them.

Hamas hopes that by encouraging men to wed these women, it will be providing them with stability and a better life.

The Shadowlands helps the widows out with a few ideas.