Thousands of Iraqis are benefiting from U.S. humanitarian efforts.
A donation of 2,000 wheelchairs in northern Iraq and the gift of school supplies in eastern Baghdad helped the hopeful communities.
Dillon Hillas reported on this good news: 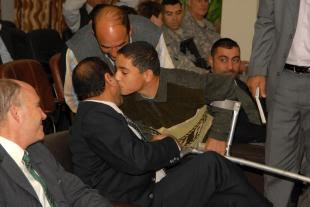 An Iraqi boy thanks Salam Salih Almuslimayi, the Babil Provincial governor, for the new wheelchairs that were being given out during a ceremony at a rehabilitation center in Hillah, Iraq, on Feb. 19.
(Photo by Petty Officer 2nd Class James Wagner)

Thanks to President George W. Bush, Iraq is thriving today like never before.
The New York Post reported:

It wasn’t just troop levels that surged in Iraq – so have cellphones, Internet use and drinking water.

Several indicators show the quality of life for the average Iraqi is on the rise as the sixth anniversary of the start of the war approaches.

There are 14.7 million cellphones today in Iraq, compared with 80,000 before the war began. That’s nearly 200 times more.

Telephone land line subscribers are also up, from a prewar total of 833,000 to 1.3 million today, according to statistics collected by the Associated Press.

The number of Iraqis who have access to drinkable water and to sewerage has nearly doubled.

Where households once had to make do with four to eight hours of electricity a day, the national average is over 14 hours a day.

The Internet was virtually unknown in the Saddam Hussein era. Only an estimated 4,500 Iraqi users existed in 2003, according to the Brookings Institution.

The deadliest month for Iraqi civilians and security forces, according to the AP count, was December 2006 with 2,309 killed. 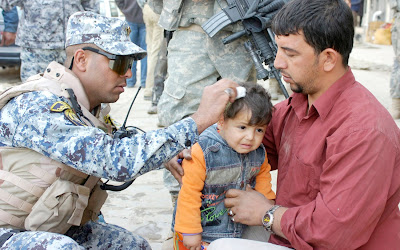 Iraqi Sgt. Maj. Thamir provides first aid to an Iraqi child during a foot patrol in the city of Karada. The boy was treated for a large gash on his head, and given a toy for his courage. Photo by Staff Sgt. Alex Licea, 82nd Airborne Division Public Affairs. (MNF-Iraq)