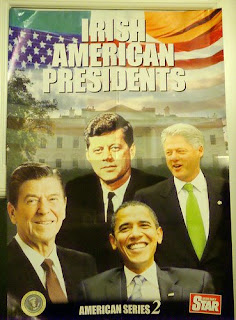 … at the White House Tuesday night.

The theme at the WH will be green all day. Starting at the top o the morning–or more like 11a.m. — Obama and Joe Biden will meet with the Taoiseach of Ireland in the Oval Office. A little while later, they’ll attend a Shamrock Ceremony in the Roosevelt Room.

After meeting with the Northern Ireland officials, Obama will travel to the Capitol where he will deliver remarks at Speaker Nancy Pelosi’s St. Paddy’s Day lunch.

Then, later in the evening, Obama will deliver the remarks at not one but two St. Patrick’s Day receptions at the WH, where he’s hosting Irish American lawmakers and other Irish Americans, a White House aide said.