“Once inside the room, according to the sources, the judge would ask the young men to drop their pants and prepare to be spanked with what they described as a wooden or fraternity-like paddle.” 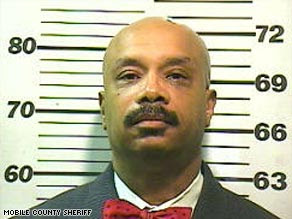 A former south Alabama judge is accused of checking male inmates out of jail and forcing them to engage in sexual activity including paddling, according to officials and court documents.

Former Mobile County Circuit Judge Herman Thomas was arrested Friday after a grand jury returned the indictments against him. He was released on $287,500 bond later Friday.

The indictments total 57 counts, and the charges range from ethics violations to kidnapping, extortion, sex abuse and sodomy. If convicted on the most serious charge — kidnapping, a Class A felony — Thomas faces a prison sentence of 10 to 99 years in prison, Mobile County District Attorney John Tyson Jr. said Monday.

But Thomas’ attorney, Robert Clark, said Friday the accusations against the former judge amount to “a high-tech lynching.”

“Did you ever think of the fact that this is the only black circuit judge we’ve ever had in Mobile County and that the right-wing Republicans have gotten rid of him?” Clark said at a news conference, portions of which were posted on the Web sites of CNN affiliates WKRG-TV in and WALA-TV.

“This is racism at its very finest.”

Thomas was arrested during that news conference; footage shows police walking up to Thomas, tapping him on the shoulder and leading him into the adjacent jail building without handcuffing him. Later Friday, Clark was threatened with arrest after refusing to leave Tyson’s news conference, according to CNN affiliate reports.

One of the prisoners was accused of murder.
NBC15 Online posted the transcript and has video:

Maybe there’s room for him with Team Obama?