Weren’t they supposed to behave and like us now that Dear Leader started talking nicey-nice?
You’d think that internet greeting would count for something. 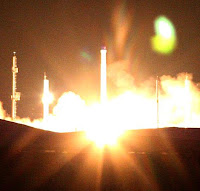 (ISNA)
Iranian experts are helping the North Koreans with their missile launch.
The AFP reported:

A group of Iranian missile experts is in North Korea to help Pyongyang prepare for a rocket launch, Japan’s Sankei Shimbun newspaper reported on Sunday.

North Korea has said it will launch a communications satellite over northern Japan between April 4 and 8, and the report said the 15-strong Iranian delegation had been in the country since the beginning of this month.

The Iranians brought a letter from their President Mahmoud Ahmadinejad to North Korean leader Kim Jong-Il stressing the importance of cooperating on space technology, it added.

The United States and its Asian allies suspect North Korea is using the launch as a cover for a long-range missile test.