Island Turtle reported that 3 of the 5 Great Lakes once again froze solid this year: 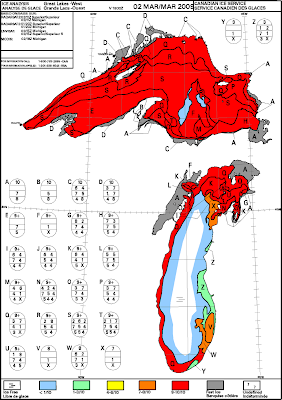 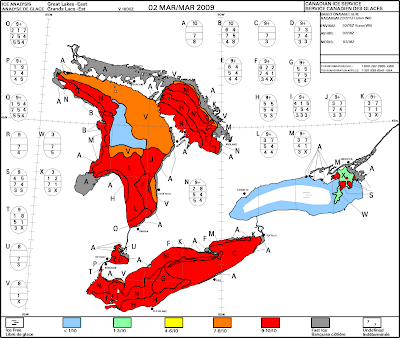 The freezing of the Great Lakes happens about once a decade. The last time was in 2003 and before that 1994, according to Ice Service records, and it was 1982 before that.

It looks like we are starting to see a pattern here:
Arctic sea ice growth finished the year in 2008 at the same level as 1979.
The oceans have been cooling since 2003.
Sea ice is growing at the fastest pace on record.
Greenland’s glaciers are stabilizing.
There are growing fears of a coming freeze worse than the ice age.
Alaskan Sea Glaciers are advancing for the first time in 250 years.
And, for the second straight year the Earth is, in fact, cooling… not warming.

This US Climate Map October 2007-November 2008 showed that temperatures were well below normal throughout the US in 2008.

But, despite the myriad of evidence against the global warming hoax, the media and politicians continue to cling to their junk science.
Business and Media Institute reported:

Temperatures have plummeted to record or near-record lows in 32 states this winter. On March 2, a global warming protest in Washington, D.C. was buried by nearly a foot of snow. And a new study warns that the Earth could be in for a 30-year cooling trend. Reality is not cooperating with the network news’ global warming theme, yet reporters are unwilling to even discuss the possibility that the Earth is cooling.

Global warming alarmists repeatedly link weather phenomena like tornadoes, hurricanes, ice melt, droughts and wildfires with global warming and the media embrace the stories. Yet, when cities or regions are buried in snow like the city of Chenzhou, China was in February 2008 there wasn’t a word about climate change in the cooling direction.

“It is being called China’s Hurricane Katrina,” NBC anchor Brian Williams said on Feb. 4, 2008. “… the month of blizzards that have brought it [China] to a virtual standstill. Millions have been stranded. Hundreds of thousands of people are homeless.” Williams didn’t chalk up the devastation to global cooling, of course. That doesn’t fit the media’s warming narrative.

James Hansen, a leading global warming alarmist, promoted a “civil disobedience” protest at a Washington, D.C. coal power plant March 2. The protestors claim that coal – and its carbon emissions are a cause of global warming. Hansen and his friends were greeted with 8 inches of snow, “strong” winds and below freezing temperatures.