There’s a new lapdog in town.
British Prime Minister Gordon Brown was eager to meet Barack Obama despite being snubbed. 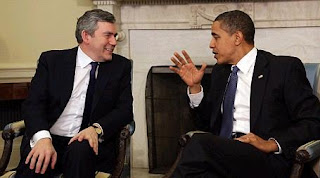 Despite Barack Obama snubbing a full press conference with Gordon Brown, the pair appeared best of friends as they sat down in the Oval Office at the White House today.

Gordon Brown will address the US Congress later today.
The British leader will compare the current recession with 1940’s fascism(?)
The BBC reported:

The two leaders also discussed the situation in Afghanistan, Iraq and the Israeli-Palestinian conflict.

Mr Brown’s address to Congress is expected to compare the battle against the global recession to the fight against European fascism in the 1940s.

Former assistant secretary of state James Rubin said one of the current fears was protectionism.

He said: “Everyone who’s an international economist is worried about this sort of thing. But everyone who’s a politician knows that people are going to have to take care of their own in a time of crisis.

“That doesn’t mean there isn’t going to be plenty of trade and plenty of international economic cooperation. But when you have a crisis like this people have a tendency to look first to their own constituents.”