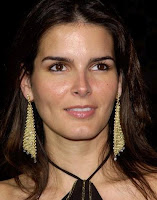 Hollywood actress Angie Harmon does not like the way Obama is handling the economy. She says he’s unclassy. She also remains a Sarah Palin fan despite the onslaught of attacks on the popular governor coming from Hollywood.
FOX News reported:

Angie Harmon is not afraid to come out and say she doesn’t like how President Obama is handling the job — but she’s sick of having to defend herself from being deemed a racist.

“Here’s my problem with this, I’m just going to come out and say it. If I have anything to say against Obama it’s not because I’m a racist, it’s because I don’t like what he’s doing as President and anybody should be able to feel that way, but what I find now is that if you say anything against him you’re called a racist,” Harmon told Tarts at Thursday’s Los Angeles launch of the new eyelash-growing formula, Latisse. “But it has nothing to do with it, I don’t care what color he is. I’m just not crazy about what he’s doing and I heard all about this, and he’s gonna do that and change and change, so okay … I’m still dressing for a recession over here buddy and we’ve got unemployment at an all-time high and that was his number one thing and that’s the thing I really don’t appreciate. If I’m going to disagree with my President, that doesn’t make me a racist. If I was to disagree with W, that doesn’t make me racist. It has nothing to do with it, it is ridiculous.”

“I do think McCain would have done a better job, only because I think he has more experience. I also think if W or John McCain or Reagan would have gone and done a talk show, the backlash would have been so huge and in his face, and ‘What is our president doing? How unclassy!’ But Obama does it and no one says anything,” Harmon said.

And in spite of the scornful opinions most of her Tinseltown counterparts have shared on Gov. Sarah Palin, Harmon remains a true fan.

Wow! Impressive.
Coming from Hollywood- that took an amazing amount of courage.