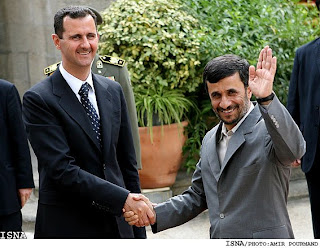 Mahmoud assured Bashar of victory over the US today. (ISNA)

Iranian President Mahmoud Ahmadinejad told his Syrian counterpart, Bashar Assad, on Friday that Israel and the US were “weakening with God’s help”.

During the phone conversation quoted by Iranian news agencies Ahmadinejad said, “The strong camp of friendly countries such as Iran and Syria are on their way to victory.”

According to the Iranian leader, “The regional conditions are working in favor of the Muslim countries and against the Zionist regime and its allies.”

Assad said that Syria and Iran were “in the same fortress”, and Ahmadinejad said the two countries should “take advantage of abilities and opportunities in a wise manner”.