Stone Age Alert…
A 75 year-old woman will receive 40 lashes for having two unrelated men in her home.
The Saudi religious police caught with the men last year.
Now she must be punished. 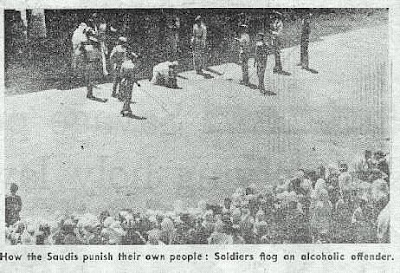 A Saudi Arabian court has sentenced a 75-year-old Syrian woman to 40 lashes, four months imprisonment and deportation from the kingdom for having two unrelated men in her house, according to local media reports.

According to the Saudi daily newspaper Al-Watan, troubles for the woman, Khamisa Mohammed Sawadi, began last year when a member of the religious police entered her house in the city of Al-Chamli and found her with two unrelated men, “Fahd” and “Hadian.”

Fahd told the policeman that he had the right to be there, because Sawadi had breast-fed him as a baby and was therefore considered to be a son to her in Islam, according to Al-Watan. Fahd, 24, added that his friend Hadian was escorting him as he delivered bread for the elderly woman. The policeman then arrested both men.

Saudi Arabia follows a strict interpretation of Islam called Wahhabism and punishes unrelated men and women who are caught mingling.