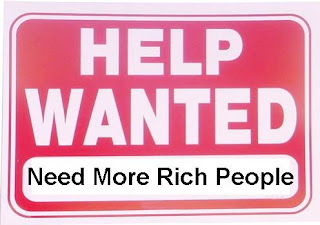 Even if Obama took ALL of the income of the top wealthiest 2% of Americans it still wouldn’t be enough to pay for his irresponsible agenda.
The Wall Street Journal reported:

President Obama has laid out the most ambitious and expensive domestic agenda since LBJ, and now all he has to do is figure out how to pay for it. On Tuesday, he left the impression that we need merely end “tax breaks for the wealthiest 2% of Americans,” and he promised that households earning less than $250,000 won’t see their taxes increased by “one single dime.”

This is going to be some trick. Even the most basic inspection of the IRS income tax statistics shows that raising taxes on the salaries, dividends and capital gains of those making more than $250,000 can’t possibly raise enough revenue to fund Mr. Obama’s new spending ambitions.

Note that federal income taxes are already “progressive” with a 35% top marginal rate, and that Mr. Obama is (so far) proposing to raise it only to 39.6%, plus another two percentage points in hidden deduction phase-outs. He’d also raise capital gains and dividend rates, but those both yield far less revenue than the income tax. These combined increases won’t come close to raising the hundreds of billions of dollars in revenue that Mr. Obama is going to need.

More… The Elector of Saxony added this:

The wealthiest 2% earn just 22% of all income, but pay 40+ percent of all taxes. Hmmm, isn’t that double their “fair share”? Considering that something like 40% of Americans pay zero income taxes, shouldn’t they be grateful that because the wealthy work so hard, earn so much, and pay so much in taxes, they get to pay nothing or worse yet receive a “tax credit” (welfare) check at tax time?