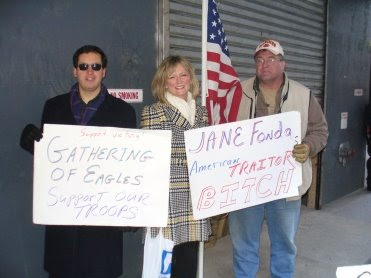 Eagles from all over the tri-state area, Vietnam Veterans and Patriots, gathered outside the Eugene O’Neill Theater on Saturday to express their LOVE and AFFECTION for America’s Most Famous Traitor, Jane Fonda. (Gathering of Eagles)
The Eagles said they were given several “Democrat IQ finger salutes.”

About a dozen Vietnam veterans and other protesters on Saturday picketed the theater where the 71-year-old actress is starring in the Broadway play “33 Variations,” telling passers-by that she had once visited their communist enemy in Hanoi.

“Jane Fonda is a traitor,” said Dan Maloney of the Gathering of Eagles, which bills itself as a national, nonpartisan veterans group. “She got on Hanoi radio and called every U.S. serviceman a war criminal.”

Fonda was tagged with the sobriquet “Hanoi Jane” after visiting the North Vietnamese capital in 1972, where she made radio broadcasts critical of U.S. policy and sat on an anti-aircraft gun laughing and clapping, as she describes in her autobiography, “My Life So Far.”

There are more shots from the protest here, including this one: 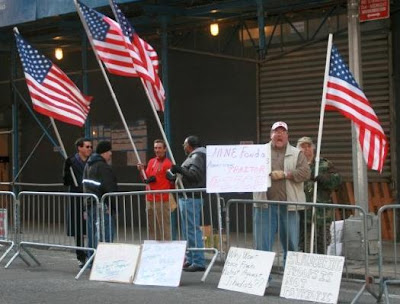 Oh, and this is golden from the NYGOE:

Barbara Walters and some of the ladies from “The View” didn’t like that we singled them out for ridicule as they were leaving, although they didn’t say anything they keep looking back over their shoulders.