Marxism Wins!
Yay, Marxism! Yay!
The Caracas Chronicles reported that Chavez has won the election in Venezuela today to extend his rule. 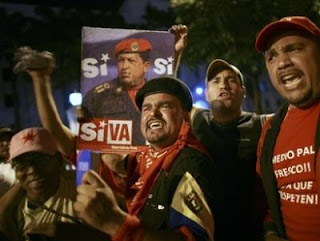 Supporters of Venezuela’s President Hugo Chavez celebrate prior to the release of any official results on Sunday’s referendum in Caracas, Sunday, Feb. 15, 2009. Venezuelans went to the polls Sunday in a referendum on a constitutional amendment which could allow Chavez and all other elected officials to run for re-election indefinitely. (AP Photo/Ariana Cubillos)

Polls have closed in Venezuela in a referendum on removing limits on how often politicians, including President Hugo Chavez, can run for office.

The outcome is expected to be close and Mr Chavez has said he will respect the result either way.

Mr Chavez has said he needs to stay in office beyond the end of his second term in 2012 so he can secure what he calls Venezuela’s socialist revolution.

Critics say the that would concentrate too much power in the presidency.

Daniel at Venezuela News and Views is following the election results.
The Devil’s Excrement is also tracking the results.

Venezuela’s President Hugo Chavez won the right to stay in power for as long as he keeps winning elections in a referendum vote on Sunday that bolsters support for his socialist and anti-U.S. policies.

What’s that saying?…
It’s easier to elect a dictator into office than to elect him out(?)
It’s likely were seeing that here.