11 vandals including 7 policemen were arrested for desecrating a Caracas synagogue in January. 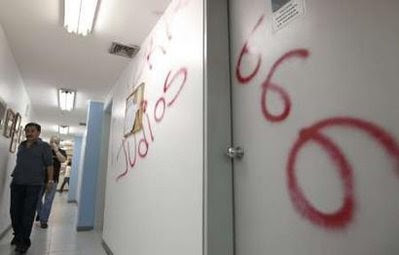 Members of Jewish community walk in front of graffiti that reads “out Jewish 666” at a synagogue in Caracas, January 31, 2009. A group of unknown people entered the Union Isrraelita Caracas and engaged in acts of vandalism. (REUTERS/Carlos Garcia Rawlins)

11 people were arrested today including 7 police officers for desecrating a synagogue in Venezuela.
The AP reported, via LGF:

Authorities arrested 11 people, including seven police officers, suspected of carrying out an attack on a Caracas synagogue that raised concerns of rising of anti-Semitism in Venezuela, officials said Sunday.

The Attorney General’s Office said an agent of the federally controlled investigative police force and one of the synagogue’s security guards were among the 11 suspects arrested during raids over the weekend. The suspects are scheduled to be arraigned Monday.

“We thank the authorities for the quick detention of the suspects,” he said in a telephone interview. “We also want to thank all of those who showed their solidarity with us.”

On Jan. 30, about 15 people overpowered two security guards at the Tiferet Israel Synagogue, shattering religious objects and spray-painting “Jews, get out” on the walls. The assailants also stole a computer database with names and addresses.