Has she looked at Gaza lately?
That “withdrawal for peace” policy certainly has worked wonders there. 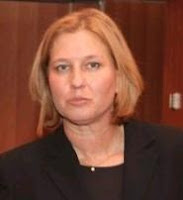 Tzipi Livni said today that Israel must give up more land to the Palestinians in exchange for peace.
The AP reported:

Tzipi Livni, who hopes to be appointed Israel’s prime minister-designate, said Monday Israel must give up considerable territory in exchange for peace with the Palestinians, drawing a clear distinction with her rival, Benjamin Netanyahu.

She told a convention of American Jewish leaders, “we need to give up parts of the Land of Israel,” using a term that refers to biblical borders that include today’s Israel, the West Bank and Gaza, repeating her well-known view that pulling out of Palestinian areas would be for the good of Israel, to maintain it as a Jewish state.

Livni told the Conference of Presidents of Major American Organizations that Israel must take the initiative and come forward with its own peace plan to head off international programs. “Any plan put on the table will not be in our interest,” she said.

Livni’s centrist Kadima Party won one more seat than the hawkish Likud, led by Netanyahu. He opposes large-scale territorial concessions in peace talks with the Palestinians. He believes negotiations should concentrate instead on building up the Palestinian economy.

Israel is not the country to have weak and confused leadership right now.