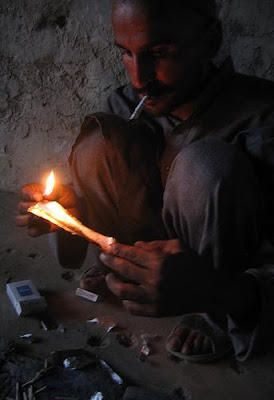 Bummer. Not everyone is cut out to be an exploding bomb.
Via the Jawa Report—
A pot-head from Kuwait was sent back home after the Taliban found out he had only joined the jihad to smoke their hashish not for the explosives.
The Arab Times reported:

The Public Prosecution Wednesday ordered the detention of a Kuwaiti man until Thursday when he will be summoned again for interrogation in a case which has been filed against him for going to Afghanistan to carry out hostile acts against the allied forces and consuming drugs.

Case papers indicate the suspect, a former drug addict, decided to go to Afghanistan to consume drugs and grew his beard to give him the look of a Jihadist.

After arriving in Afghanistan the man joined a training camp and one week later asked fellow trainees to guide him to the place where hashish is grown. When he arrived at the spot, he took to consuming drugs, says the case papers.

When the Taleban saw him, they were shocked and they came to the conclusion that he had not come to Afghanistan to fight a holy war. So, they asked him to leave.

When he returned to Kuwait, he was in a disoriented condition and he was referred to the concerned authorities.

During interrogation by the Public Prosecution he admitted to going to Afghanistan for ‘Jihad’ and consuming drugs.