“Removing Saddam Hussein from power was the right decision, and this is a fight America can and must win… For the terrorists, Iraq was supposed to be the place where al Qaeda rallied Arab masses to drive America out. Instead, Iraq has become the place where Arabs joined with Americans to drive al Qaeda out. Critics of the war of can no longer credibly argue that we are losing in Iraq, so now they argue the war costs too much.”

Of course, Barack Obama never missed a chance to blast the Bush Administration for spending billions in Iraq.

But, suddenly blowing billions of taxpayer dollars is not an issue.
It took Barack Obama and democrats only three weeks to blow twice as much as was spent on the Iraq War- Approximately 1 trillion versus 500 billion. 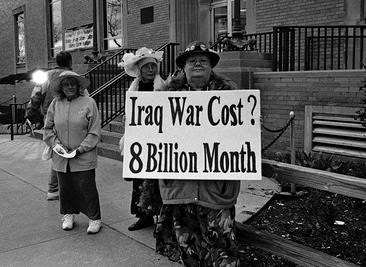 Where have all the fiscal loons gone?

And, if the true Generational Theft Act price tag of $3.27 trillion is reached in the next couple of months, that would be 6 times as much as was spent in over 5 years liberating, stabilizing and building a functioning democracy in Iraq.

Related… New York will receive more federal money from the bailout than it did after 9-11.