The gall of these people…
Barack Obama is speaking to House Democrats on their trillion dollar stimulus bill at their taxpayer-funded spa retreat tonight. 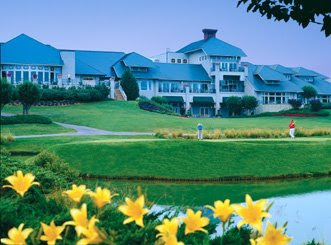 Life is good for Democrats at their taxpayer funded Kingsmill retreats.

Obama flew down to see them this evening for the political event.

He just congratulated the liberal House for creating and passing the most massive spending bill in American history filled from top to bottom with pork for every Left Wing organization that helped get them get elected.

The plan will end the “tyranny of oil” in our time.
–Maybe that’s why they just scrapped oil and gas leases on land in Utah.

This group of thugs all got a good chuckle when he mentioned “Alaska.”
It must have been an inside joke.

It’s too bad no one asked him about the the 2 BILLION DOLLAR EARMARK — obtained by Rod Blagojevich.

Here are a few choice lines from his spa speech.
Notice the chuckles when he mentions Alaska:
(2 minutes 44 seconds)

It was a weak talk.

Actually, the Democrat spending spree is even worse than you think.
National Review has “50 De-Stimulating Facts” about the bill.

Thank goodness the Senate Leader does not have his 60 votes yet to pass this boondoggle.