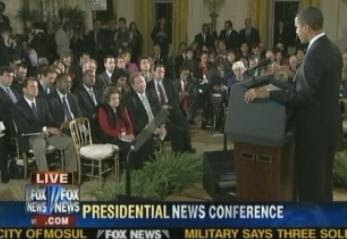 Schultz told critics today that: “I have earned that seat.”
Uh-huh. Sure you have, Ed. That’s why your show was created and financed by liberal bigwigs.
The Politico reported:

“I end up with a front row seat in the first prime-time press conference, and all of a sudden it’s all over the blogosphere,” Schultz said.

Schultz called Politico’s Jonathan Martin a “punk” and a “nitwit” for asking if it was an assigned seat.

“I have earned that seat,” the veteran radio host said on the air.

Schultz claimed that conservative hosts had access to the Oval Office during the Bush years, and that wasn’t noted by the press. However, I think it’s safe to say that if McCain were elected, and Limbaugh had a spot right up front, the media would call attention to it.

By seating him in the front row, taking a question from the Huffington Post, and calling on Helen Thomas, Schultz said it’s evident that the White House is “listening outside the mainstream media.”

In markets where Schultz goes head-to-head with Rush and Hannity he gets buried in the ratings.