What’s with this guy?
The election was over in November and still he’s slamming conservatives.
Wasn’t his campaign about hope and change, or something like that?

He also defended the tax cheats he picked for cabinet positions.
…And, in the next breath praised his administration for its “highest ethical standards” ever(?)

Oh, and once again, Obama used the troops for his political advantage: 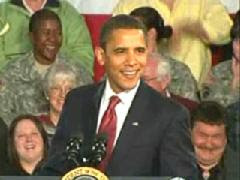 Of course, the mainstream media gave him a pass.
Funny how that works.

Related… Right.org was just set up to oppose the $8 trillion in bailout guarantees our government has given to failed companies (on average, more than $60,000 per family in America). Drudge will be carrying the story later today, but they are trying to spread the word as quickly as possible. In addition to keeping the public attention on the bailouts, they are also sending faxes to Congress in opposition to the bailouts.
Check it out!