Unreal. The NAACP, a former civil rights organization, is threatening the NY Post with a boycott over a Travis the Chimp cartoon directed at Congress.
NAACP President Julian Bond wants the editor and cartoonist Sean Delonas fired over an editorial cartoon.
Bond says they are “Inviting the assassination of President Obama”:

From the YouTube video: Julian Bond of the NAACP said that the is Inviting the Assassination of President Barack Obama. Al Sharpton has organized a series of rallies. The New York Post has chosen the month February, which is Black History Month to insult President Obama, the first African-American President. Rev. Al Sharpton along with the people (Blacks and whites) have asked to shut down the newspaper. The New York Post is clearly inciting violence.

Note: The NAACP is the same group that invited Jeremiah Wright to speak at the largest sitdown dinner in the country after tapes of his vile anti-American hate-filled sermons were released to the public.

Julian Bond argued in 2006 that the Bush administration was using Colin Powell and Condoleezza Rice as “human shields.”
Julian Bond also blamed the Iraq War for the weakened levees in New Orleans and that Katrina, like lynching, not only destroyed the work of generations in a single day, but resulted in a deliberate effort to dispossess black landholders.”

The New York Post issued a broad apology for the Travis the Chimp cartoon on Friday that democrats said represented the president. 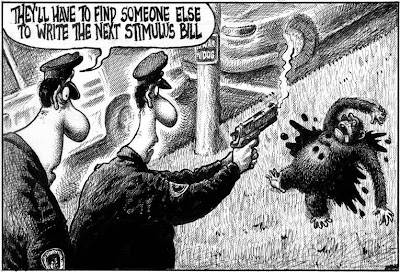 Sean Delonas used the bizarre case of the crazed flesh-eating Travis the Chimpanzee to comment harshly on the Democrats’ “stimulus” package.

UPDATE: Al Sharpton is now calling for the FCC to investigate the NY Post because of the Travis the Chimp cartoon.