The tone was set early by disappointment President Barack Obama shed little new light about how his administration would stabilize the economy in a major speech before Congress.

It looks like another Barry Market day.
Will Obama and Democrats bust below that 7,000 ceiling? We’ll see: 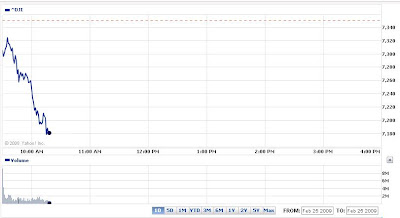 Stocks were down this morning by 150 points or 2% today.

Maybe the markets were reacting to the Democrat’s promise to raise taxes on the rich? Or, maybe it was the talk about raising taxes on businesses? It might have been the promise to spend billions more on another pork-laden bill?
Who knows?

John at Power Line may have said it best:

Obama is committed to policies that will damage our economy, run up trillions of dollars in debt, increase taxes, cause inflation, make the nation less competitive, feed unproductive Democratic Party constituencies at the expense of the “real” economy, and make the United States weaker abroad. He can give any number of speeches, and Nancy Pelosi, Harry Reid and their cohorts will applaud. But reality will not yield so easily.

We’re seeing that in the market’s reaction today.

UPDATE: After the market rebounded during the day the Dow tanked after Barack Obama spoke this afternoon.
The market ended up down 80 points.
Thanks Barry.