The country of Pakistan is in shock after a journalist was shot dead at a Taliban peace march.
Musa Khankhel had been shot three times and his killers had attempted to cut off his head. 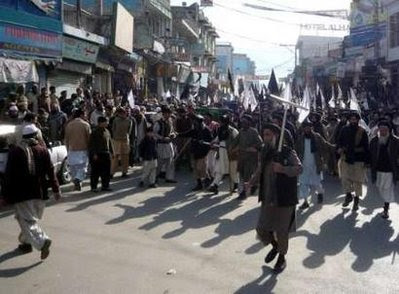 Supporters of Muslim cleric Maulana Sufi Mohammad peace march on the street of in Mingora, outskirts of Swat valley February 18, 2009. A radical Muslim cleric who led a struggle for Islamic law in Pakistan’s troubled Swat valley began a “peace march” on Wednesday to persuade the Taliban to stop fighting, two days after reaching an accord with the government. (REUTERS/Abdul Rehman)

Pakistani journalist was found dead after he came to the Swat Region to cover a “peace march” led by Sufi Mohammad in the Matta area.