John F. Kerry was on a “listen and learn” tour in Gaza. 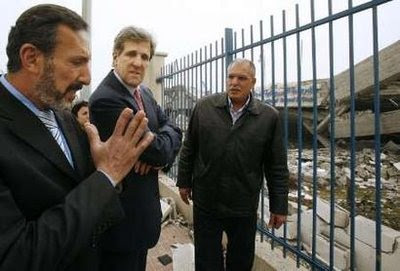 U.S. Senator John Kerry (D-MA) listens to a Palestinian man during his visit to the destroyed American International School in the northern Gaza Strip February 19, 2009. Senator Kerry and two other lawmakers made a rare visit to the Gaza Strip on Thursday but insisted a boycott of its Hamas Islamist rulers remained intact.Senate Foreign Relations Committee Chairman Kerry, who ran an unsuccessful campaign for president in 2004, and two members of the House of Representatives, Brian Baird and Keith Ellison, entered the Gaza Strip separately. (REUTERS/Suhaib Salem)

John Kerry traveled to the Hamas-controlled Gaza Strip today.
He’s going to “listen and learn” from the Iranian-backed Islamofascists who want to destroy Israel.
AFP reported:

US Senator John Kerry on Thursday made a rare visit to the war-ravaged Gaza Strip, but stressed this did not reflect a change of policy towards the territory’s Islamist rulers listed by Washington as a terror group.

The visit “does not indicate any shift whatsoever with respect to Hamas,” said Kerry, who heads the Senate’s powerful foreign relations committee.

His first stop in the impoverished Palestinian enclave was the American school that was left in ruins by the deadly 22-day Israeli offensive that ended on January 18.

Talking to a Palestinian lawyer amid the dust and rubble, Kerry came to the defence of Israel for responding to almost daily rocket attacks by Hamas and other Palestinian militant groups.

“Your political leadership needs to understand that any nation that has rockets coming into it over many years, threatening its citizens, is going to respond,” Kerry told Shar Habeel al-Zaim. 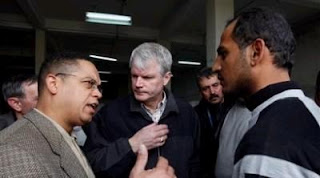 Related… Ed Lasky at the American Thinker writes today on how the allies of Palestinians have a powerful friend in Barack Obama.
Hat Tip Larwyn

More… Lurch said on Thursday that he hopes that Syria will help disarm Hezbollah.
Yeah… That’s going to happen.