Of course.
The destructive and evil Mr. Bush pushed the kindly North Korean regime to develop nukes.
If only he would have continued the failed policies of the Clinton years the North Koreans would be nuke-less.
At least, that’s what a delusional Hillary Clinton told reporters on her flight to Asia this weekend.

So, does that mean it Bush’s fault that the North Korean regime blew up its cooling tower at the Yongbyon nuclear plant last June, too? 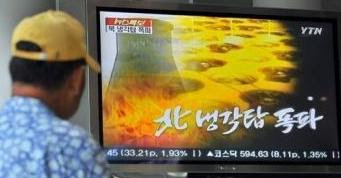 A South Korean watches a TV report on the planned demolition of a cooling tower at Yongbyon. (AFP)

During her plane trip, she implicitly criticized the Bush administration for abandoning the so-called 1994 Agreed Framework with North Korea, reached during President Bill Clinton’s first term in the White House, which called for the North to give up its plutonium-based weapons program.

The framework collapsed when the Bush team accused Pyongyang of maintaining a separate highly enriched uranium program, about which Secretary Clinton said there was still great debate. As a result, she said, the North had restarted and accelerated its plutonium program, allowing it to build a nuclear device that it had detonated in 2006.

Clinton said one goal of her trip was to demonstrate a new U.S. commitment to work with Asian leaders on “problems that no one nation, including ours, can deal with alone.”

So, does Hillary also believe that Bush forced North Korea to sell its nuclear material to Syria? Was that his fault, too?

Of course, what Hillary is forgetting is that the North Korean regime violated the agreed framework almost from the time it was signed during the Clinton years.

Hillary will also be for pushing (non-existent) global warming and climate change policies during her trip to Asia this week.