An Iraqi woman had 80 women raped and then talked them into exploding themselves to escape the shame.
She called herself “The Mother of All (evil) Believers” and was a member of Ansar al-Sunna, a radical Islamist group linked to Al-Qaeda.

The face of evil– Samira Ahmed Jassim had 80 women raped and shamed them into becoming human bombs. 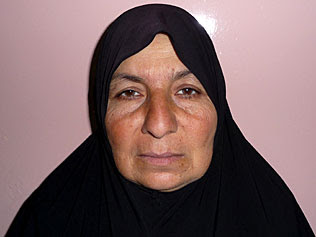 Mastermind … Samira Ahmed Jassim confessed to organising the rape of 80 women so she could recruit them as suicide bombers. (Herald Sun)

In case the Left was still wondering.
This is the evil we are up against.
It’s not George W. Bush.
The Herald Sun reported, via LGF:

A WOMAN suspected of recruiting more than 80 female suicide bombers has confessed to organising their rapes so she could later convince them that martyrdom was the only way to escape the shame.

Samira Jassam, 51, was arrested by Iraqi police and confessed to recruiting the women and orchestrating dozens of attacks.

In a video confession, she explained how she had mentally prepared the women for martyrdom operations, passed them on to terrorists who provided explosives, and then took the bombers to their targets.

“We arrested Samira Jassim, known as ‘Um al-Mumenin’, the mother of the believers, who was responsible for recruiting 80 women”, Major General Qassim Atta said.

“She confessed her responsibility for these actions, and she confirmed that 28 attempts had been made in one of the terrorists’ strongholds,” he said.

Samira Jassim was arrested on January 21. She is allegedly linked to the Ansar al-Sunnah insurgent group…