Hundreds of thousands of people crowded central Beirut on Saturday to mark the fourth anniversary of ex-premier Rafiq Hariri’s assassination. 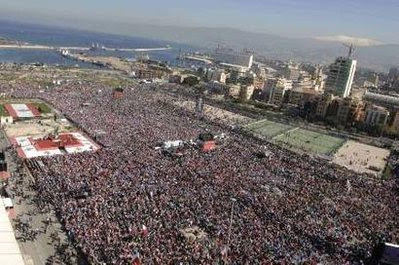 The hundreds of thousands of Hariri supporters rallied for freedom from Syria on this sunny Beirut day. But the demonstration did not go unnoticed by the Hezbollah terrorist organization. The pro-Iranian regime thugs attacked the protesters with rocks, knives and sticks.
Naharnet reported:

At least 30 people were wounded in attacks by March 8 partisans against unarmed civilians who took part in a mass rally in Beirut’s Martyrs Square marking the fourth anniversary of ex-Premier Rafik Hariri’s assassination on Saturday.

The victims were evacuated to the Makassed Islamic Hospital in Beirut’s Tarik Jedideh district and the Sacred Heart Hospital in Hazmiyeh.

Army troops intervened to protect hundreds of thousands of unarmed civilians who took part in the rally marking the Hariri crime anniversary.

The attackers used sticks, rocks, daggers and fire arms in their assaults.

The Hezbollah backers attacked the protesters after the rally in several Muslim neighborhoods of Beirut. Lebanese Troops intervened to restore order. 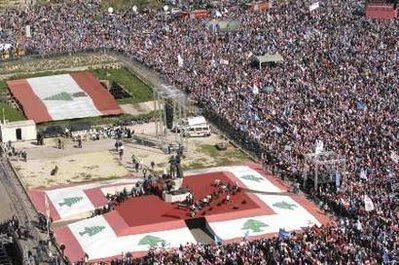