Hillary Clinton wrote a crowd-pleasing book Dear Socks, Dear Buddy: Kids’ Letters to the First Pets, in which she claimed that only with the arrival of Socks and his “toy mouse” did the White House “become a home”.

Hillary quickly dumped the cat when she left the White House. 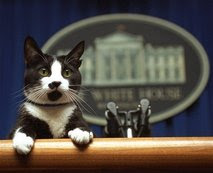 Poor Socks passed away today after a long bout with cancer.
The Clinton Foundation released a statement:

“Socks brought much happiness to Chelsea and us over the years, and enjoyment to kids and cat lovers everywhere. We’re grateful for those memories, and we especially want to thank our good friend, Betty Currie, for taking such loving care of Socks for so many years.”

Socks had reached his late teens — an advanced age for a cat — when reports surfaced in late 2008 that he had cancer and Currie had ruled out invasive efforts to prolong his life.

Socks was like family to the Clintons.
The Times Online reported on the dear family pet last year, via Sweetness and Light:

AS THE “first pet” of the Clinton era, Socks, the White House cat, allowed “chilly” Hillary Clinton to show a caring, maternal side as well as bringing joy to her daughter Chelsea. So where is Socks today?

Once the presidency was over, there was no room for Socks any more. After years of loyal service at the White House, the black and white cat was dumped on Betty Currie, Bill Clinton’s personal secretary, who also had an embarrassing clean-up role in the saga of his relationship with the intern Monica Lewinsky.

If only cats could talk, the stories Socks could tell.
RIP, dear Socks.