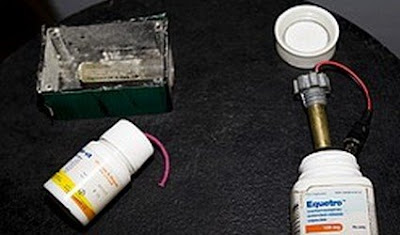 Is there anything that Hamas will not do to kill Jews?
Their latest crime involves medicine bottles donated to the people of Gaza from Israel.
The Jerusalem Post reported:

Medicine bottles, transferred to the Gaza Strip as humanitarian aid by Israel, were used by Hamas as grenades against IDF troops during Operation Cast Lead. Pictures of the grenades were obtained exclusively by The Jerusalem Post.

The medicine bottles were manufactured by the Jerusalem Pharmaceutical Company, which is based in el-Bireh, a town adjacent to Ramallah, and the global pharmaceutical company Shire.

Mere Rhetoric has more on the returned humanitarian supplies.