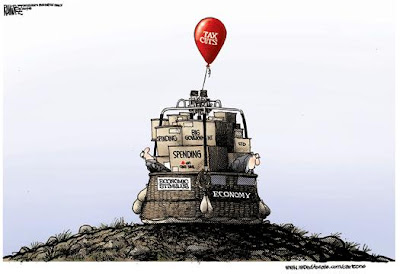 Republican House Leader John Boehner reported today that the Democratic Stimulus Bill will saddle every American with $6,500 in more debt.
But, democrats are giving you $13 of your money back every week.
Boehner Blog reported:

Democrats’ trillion-dollar spending bill provides $1.10 per day in tax relief to workers, while saddling every American family with $6,500 in added debt.

Following are some very tentative quick facts on the trillion-dollar “stimulus” spending deal slated to be rushed through the House and Senate today or tomorrow by Congressional Democrats, as compiled by the Office of House Republican Leader John Boehner (R-OH). These are based on best estimates on legislative text and scoring and may be subject to revision.

1. Generational Theft. The final agreement will cost each and every household more than $6,500 in additional debt, paid for by our children and grandchildren.

2. Paltry Tax Relief for Working Families and Small Businesses. The “Making Work Pay” tax credit at the center of the plan amounts to $1.10 a day, not even enough to ride the bus one-way to work. According to the Associated Press, “Officials estimated [the bill’s tax relief provisions] would mean about $13 a week more in people’s paychecks when withholding tables are adjusted in late spring. Critics say that’s unlikely to do much to boost consumption.” (Taylor, Andrew; “Economic stimulus package on track for final votes,” Associated Press, 12 Feb 09). While the specifics remain unknown, it appears likely that tax relief to help small businesses — the primary engine of American job creation — represents even less of a share of the final tax package, and it had been only a tiny percentage of the overall package to begin with.

3. Massive Government Expansion. The final agreement is almost as much as the annual discretionary budget for the entire federal government.

4. A Trillion-Dollar Spending Bill. The $789.5 billion final agreement slated for a House vote either today or tomorrow will exceed more than $1 trillion when adding in the interest of approximately $300 billion between 2009-2019.

5. Unnecessary Spending That Won’t Create Jobs. Apparently included in the final “jobs” bill is money for plug-in vehicles, money for STD prevention, and money for ACORN (via the Neighborhood Stabilization Program and CDBG program). The final agreement also creates new programs and funds existing programs that can be used to fund earmarks and pork-barrel projects.

More… What a difference $76 dollars make.