Tastes like chicken.
A bird suspected to be extinct was reportedly photographed for the first time in the Philippines in January… Then sold at a poultry market and eaten.
A Worcester’s buttonquail was known only through illustrations based on decades-old museum specimens until a television crew documented the live bird in the market before it was sold. 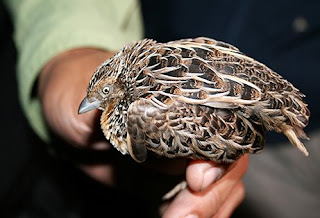 A rare quail from the Philippines was photographed for the first time before being sold as food at a poultry market and eaten. (National Geographic)