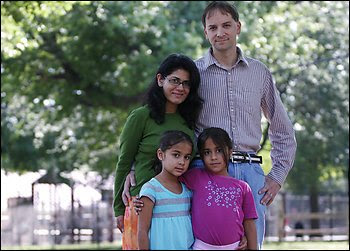 People have always relocated to seek out better living conditions.
Floods and famine have always been a scourge on humanity.
But, now the WaPo is reporting that eco-loons are joining the poor and destitute and actually relocating to green friendly communities.
The Washington Post reported:

Adam Fier recently sold his home, got rid of his car and pulled his twin 6-year-old girls out of elementary school in Montgomery County. He and his wife packed the family’s belongings and moved to New Zealand — a place they had never visited or seen before, and where they have no family or professional connections. Among the top reasons: global warming.

…By choice or necessity, millions of “ecomigrants” — most of them poor and desperate — are on the move in search of more habitable living space.

There were about 25 million ecomigrants in the world a little more than a decade ago, said Norman Myers, a respected British environmental researcher at Oxford University. That number is now “a good deal higher,” he added. “It’s plain that sea-level rise in the wake of climate change will inundate the homelands of huge numbers of people.”

In Bangladesh, about 12 million to 17 million people have fled their homes in recent decades because of environmental disasters — and the low-lying country is likely to experience more intense flooding in the future. In several countries in Africa’s Sahel region, bordering the Sahara, about 10 million people have been driven to move by droughts and famines.

There’s got to be a way we can help ship more loons to New Zealand.
Surely, we can come up with something.

Related… It looks like an Ice Age in Oslo– locals are forced to dump snow in the sea.