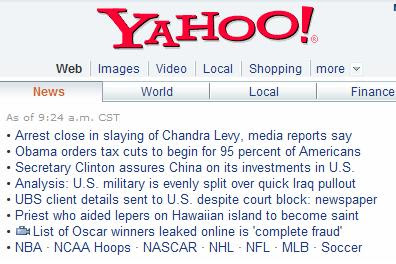 But, when you read the article you find out this is not true.
Nowhere in the article does it prove that the military is “evenly” divided on leaving Iraq. There were no polls taken. Nothing.
The headline is absolutely untrue.
But, it does convey to readers that “even the military wants out of Iraq.”
That’s important.
The AP reported:

President Barack Obama faces split opinions within the military on whether to make the speedy withdrawal from Iraq he championed on the campaign trail.

Obama’s top generals in Baghdad are pressing for an elongated timetable, while some influential senior advisers inside the Pentagon are more amenable to a quicker pullout.

Although Obama has yet to decide the matter, his announcement last week that he’s sending thousands more combat troops to Afghanistan implies a drawdown of at least two brigades from Iraq by summer.

But that does not answer the question that has been dangling over Iraq since he took office in January: Will Obama stick to his stated goal of a 16-month pullout or opt for a slower, less risky approach?

Gen. Ray Odierno, the top American commander in Baghdad, favors a longer timetable for leaving Iraq. He sees 2009 as a pivotal year, with parliamentary elections set to be held in December; he doesn’t want to lose more than two of the 14 combat brigades that are now in Iraq before the end of the year. And he believes the U.S. military will need to remain engaged in Iraq, to some degree, for years to come…

Funny.
The media still wants readers to believe that Obama’s campaign promises mean anything today.
It’s pretty obvious that is not true.